With the arrival of the pre-patch in preparation for World of Warcraft: Burning Crusade Classic (BCC), the MayronUI user base has been demanding updates and reporting bugs. I have been very active in tackling them fast, but unfortunately, I did not receive a BCC beta key until very close to when the pre-patch arrived, around the same time that BCC beta was undergoing its final stress tests. Ironically, this caused me a lot of stress with the lack of availability to prepare the UI for the new changes, but I am delighted to announce that all bugs have been identified and fixed, and the UI now fully supports BCC.

In addition to bug fixing, the latest versions of MayronUI has many significant improvements that I will cover in this blog post:

TipTac has been replaced with a dedicated MUI Tool-Tips module

TipTac was the original tool-tip addOn included in the full MayronUI pack available on WoWInterface and has been for roughly 6-9 years. My plan for a long time has been to slowly replace all external (i.e., non-MayronUI) addons in the MayronUI pack with MUI modules. This change would reduce the total number of folders in the user's interface > addons, reduce the .zip file download size, and have a single configuration menu for all MUI functionality. It would also allow me to maintain the UI package easier and faster and provide better quality support to those in the discord community.

I began to notice that the author of TipTac would often neglect to update TipTac on time for significant WoW client updates, and TipTac would be one of the last addons available on beta or PTR servers. This delay would worry the community, and even when the game was released, there were some visual bugs. No addon developer enjoys reading and trying to make sense of someone else's work to fix their bugs, especially for UI packs; Users may accidentally update modified addons with older versions and erase their fixes. The shift to an MUI tool-tip module was always on the list of things to do, but now seemed the right time to tackle the challenge.

The new MUI Tool-Tips module has a bunch of very useful functionality while also remaining very small and modular in implementation. All tool-tips now have that MayronUI aesthetic but can be fully customized in appearance.

Most of the more significant features are related to the unit tool-tips (i.e., tool-tips that show when you place your mouse cursor over a unit, such as a player or an NPC).

The module includes the following features for unit tool-tips, which can all be customized, enabled, and disabled based on the preferences of the user: 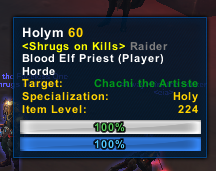 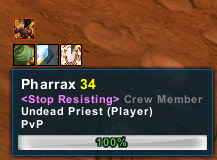 Other Changes to MUI

Now, with MUI version 6.6.0, you can set a custom alpha value for timer-bars representing auras that originated from another player or NPC. Other player buffs and debuffs with the same name as yours can appear slightly faded, which helps you identify yours and reduce the background noise. 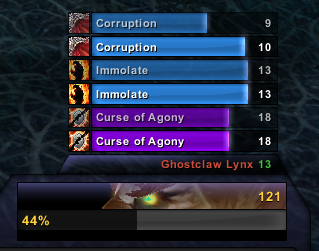 Also, a bug in pre-6.6.0 meant you could not have more than one aura with the same name on one timer-bar field. For example, if you were playing on a warlock and another warlock happened to cast a curse on your target, and you also cast that same spell on that target, then only one would show, making things very confusing very quickly. Luckily, MUI version 6.6.0 fixes this bug, and so I recommend upgrading to the latest version ASAP if you require this feature.

I previously covered the two most significant changes in 6.6.0 (the tool-tips module and the changes with the timer-bars module). The following changelog list covers all 6.6.0 changes, as well as other more minor changes that are still worth noting:

If you have already downloaded the entire UI pack from WoWInterface following the instructions from https://mayronui.com/p/mayronui, you only need to use an addon updater tool, such as CurseForge, to update the 3 MUI addons (MUICore, MUIConfig, and MUI_Setup) to the new 6.6.0-universal version.

Recently, I made the change to only upload a "Universal" edition of these 3 MUI addons. Each of them now includes three .toc files to cover all three versions of the WoW game client (retail, classic, and bcc). You only need to look for this "Universal" file rather than downloading separate files per game client. This change makes the download experience much easier for the user.

Thank you for reading, and please feel free to ask any questions on our communities discord server: https://mayronui.com/community